Well.... that headline statement is kind of true.  I've dabbled occasionally in the world of a used Canon 5D Mkii but each time I quickly disposed of it due to the large size and the 'hefty look' of it.  I've also owned a couple of Sony cameras with the translucent mirror which are similar but always felt like the first step on the way to the true mirrorless trend with their smaller size.  It might also be relevant to say I've never owned a manual film camera either given what I'm about to say below.

I want to write a few thoughts on various pieces of Fuji equipment I've had experience with when I can, and thought I'd start with how I dipped my foot in the water and haven't really looked back, but kind of still keep my Sony equipment for comfort/looking back. 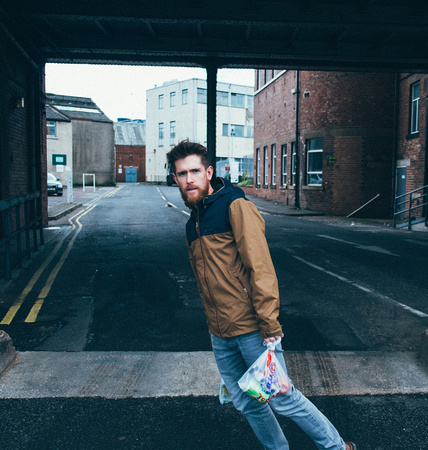 Flying Back from the ShopsA random photo of me taken by Timbobettso that just seems to have that Fuji feel.

So I now had a Sony setup which had served me really well and I'd fallen for the Fuji feel.  I searched for the kind of Fuji v Sony phrase so many times, looking for someone else to make my decision for me.  I'd really enjoyed using the Fuji but I'd also created so many of my favourite photos with the Sony A7 I couldn't think to just discard it.  There was also the technical differences at play which you can't fully ignore.

I literally resent myself every time I type such silly questions into google hoping for someone to have posted an impossible answer to an unnecessary question.  I still do it however and have read so many arguments about the Sony Full Frame mirrorless systems and the Fuji systems being the best.  In summary I can tell you if you want the best features of each camera model and brand you will need to buy both cameras and native lenses.  If you want to buy only one and like most people can only afford to invest properly in only one then you will lose something.  Here's my currently logic on the pro's and con's, not about the handling and the tech spec's as such but the practical aspect's for my photography style and subjects.

Looking back on these images now I wonder what I am doing considering taking up the Fuji system full time and putting all the Sony equipment up for sale.  Maybe this article is a farewell to the Sony equipment that has led to much loved images. Certainly the Sony A7 made me feel like a legitimate photographer who could deservedly hold his own getting up in the morning for sunrise, setting up the tripod and developing more creative images.  I had always felt the NEX 7 was a functional camera but without a Full Frame sensor to complete with the 5d Mkii I'd feel inferior rummaging around the trees of Bole Hill Quarry and bumping into a 5D wielding professional.

MY CURRENT THOUGHTS AND PLANS

As I say above there is no single system to suite my needs, if I could or can afford it maybe holding onto both is an option but keeping the A7 and sticking with the A mount lenses doesn't seem to make sense given there are now well regarded native FE lenses available.  To get the lens setup comparable to my current A Mount lenses would however set me back around £1,700.

I have recently bought a Fuji X-T10 taking advantage of some black Friday discount as one of the frustrations with the Fuji X-E1 was it's slightly slow operating speed (bracketing would take an age), it's lack of a couple of buttons and it's lack of a flip screen for the low down close up nature photos I regularly take.  For £350 it seemed like a small price upgrade from the £200 I'd paid for the used X-E1 for a lot more functionality, it's also a little smaller and lighter.

I also now own the Fuji 55-200mm lens so have a fairly complete focal range covered in with the sharp zooms and along with the 60mm macro I can take all the images I love at high quality with three fairly small lenses compared to perhaps 5 larger lenses with my Sony setup. The 55-200 is a nice sharp lens (up to 135mm) and smaller in the bag than the Sony 70-200.

What I lack however is a wide angle lens for the Fuji and some of the juicy sounding prime lenses, especially a comparable 50mm prime a focal length I've fallen in love with since owning the Minolta f1.7.  To add the primes & wide angle option would probably cost around £1100 with used lenses, so less than getting something comparable for the Sony setup.

If size and convenience wasn't a consideration the perfect setup for me would be the Sony A7 with 20mm f2.8 for wide angle work and the FE 70-200 for tele zoomed work.  The Fuji would then cover the macro work and general travel camera with it's zooms and a mid range prime, it doesn't seem sensible however to have two completely different camera setups in your bag with such added weight and accessories etc.

My final though is how much I love the feel of the X-T1 when's I've briefly played with it and it's weather sealing would be an added bonus for Lake District trips and the like.  If I do stick with the Fuji system I'd probably end up getting one second hand for around £400 after selling the X-E1 and maybe the 18-135 lens as the ultimate 1 lens travel kit (adding another £350 for a used lens).  This takes the Fuji option for me up to around £1,900 I think I could then sell the Sony equipment for something like that amount to be cost neutral have 2 lovely Fuji cameras with a lovely set of lenses..........

........but only 16mp and those slightly too grainy landscape shadows.

I suppose if I went for the Sony lens investment option I could sell the Fuji kit for around £600 reducing that option to £1,100 investment, hmmmmmmm.  Then again what about the Sony A7rii, perhaps the ultimate camera! Small enough in size with a 35mm f2.8 on it, high resolution, in built stabilisation, good shadow recovery. I don't need it now but in a year's time with a price drop that's one hell of a camera to stick on the back of my existing lenses.  Then again would be A Mount lenses really get the best of out such a high res camera. It certainly wouldn't produce quite the same quality and feel or images as the Fuji. Do I really need such high resolution.  In truth yes sometimes.  Not for large prints sizes but for allowing crops on some of my work and still leaving a useable image.

As you can see I'm still undecided in so many ways and I'm trying to wait and see what Fuji do next in terms of sensor technology and to get my hands on some of the Fuji primes to see how much they improve from the zoom lens.  I have also ordered a silver 27mm prime lens to attach to the X-E1 just because it's silver mostly and small.

It's funny how a big part of any future decision has a tinge of emotional factoring, knowing which images I've taken with each camera etc and the love of the Fuji look and feeling. None of those things relate to technical spec, jargon or cost really.  I mean just look at all those dials they do exactly the same as the boring black Sony dials but I mean, just look at those dials ........... 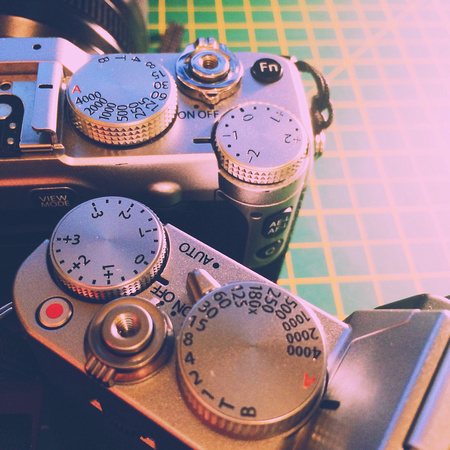 Fuji X series dialsLook at all those dials and retro vibes.

In future posts I'm going to talk more about my experience with each Fuji lens and some examples of image processing that has worked and where I've struggled with each system.

Until then, thanks for reading.  Hopefully this is a bit different from all the standard camera reviews and is based on a genuine long term experience related more to photography style that the camera numbers game.

Please feel free to get in touch via comments or email with your thoughts, experience & questions.

Also check out my latest work, styles and subjects. 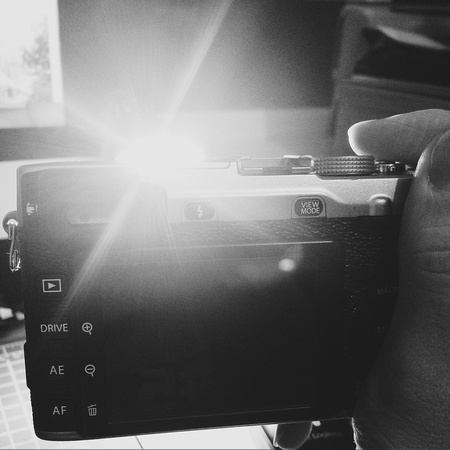 Fuji X series dialsThe Fuji feeling from behind the camera.

Dan is a landscape & nature photographer from Sheffield in the UK.